We had a great trip! Ate a lot and drank, it was fun! Thanks Flightsbnb! 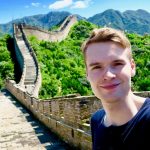 Tour guide came on time met him in the Hotel lobby, got in to the Minivan there was two other couple from Australia and New Zealand. Said Hi hello and that is it. December in Bucharest was just not only Cold but the icy-wind feel it on my face just like a sharp knife. We stop at Brasov, nice town we had our Lunch with very good Hot soup and then proceed to Dracula Castle. It was minus 25 degree, but local wasn’t worry about it. It was just like another normal day, but as a Californian it wasn’t ordinary day for me, it was freezing however after cup of Coffee it wasn’t that bad. I totally enjoy the trip.

Very big city with heavy traffic jam where you find the word of discipline not exist, and Taxi drivers hassles with tourist is really a biggest problem. Taxi has meter but not for tourist, Taxi drivers want to screw you as deep as possible. Regardless you go to Tangier Casablanca or Rabat it is all Same DNA. Capital of the scums.

Thanks to Flightsbnb for set me up my group for late night Flamenco show. I think it was the best performance I ever seen, I would say this show was much better than Madrid. My especial thanks to Maria who really spend time to fix my trip and helping me to change my flights between Malaga to Warszawa. Thanks again.

First time when I called to Flightsbnb and asked them if they could help me out with a trip going in to a deep Polish village “Krosno”. Which is south west of Poland near Slovakia. Booking agent told me yes “not a problem I can set you up anywhere in the planet”. Sound aggressive and confidence? He didn’t call me in 30 minutes but 3 hours later. I understood he was busy and needs 30 minutes to research to find out how to get me in there. Believe it or not they really set me up with three weeks Apartment rental, Bus Tickets and Domestic flights. Now I ‘m planning to open a restaurant business here in “Krosno” where has about 38 thousand population and trust me very clean city. Beside Polish people are so nice and so hospitality. Polish village are clean and beautiful houses with nice gardens and green filed and tree is so peaceful. Fruits vegetables just fresh as you can think of. I couldn’t do this trip without Samuel (the Agent of Flights BNB), Cheers.

Service, service and service which makes every business to thrives. I had a short domestic flight from Warsaw with Lot polish airlines, flying time 50 minutes and inflight they offered snacks and drink. However Norwegian Airlines from Malaga to Warsaw about 4 hrs. flights and not even offer a glass of free water. It was a vary hot day 39C. and inside the aircraft AC flow wasn’t good. They had Beer,wine and chips for sale only. If you are flying with them eat and drink well before you step in to the penny-pinching Norwegian flights. When some company just busy counting money and doesn’t care customers least free water, then they shouldn’t send me a survey e-mail and asking how was their service? I just laughed and didn’t respond to the survey, because the Airlines already know they are suck anyway. I will not fly with those Airlines who doesn’t show any hospitality.

I had the best time of my life in Europe this summer, thanks Flightsbnb.com

I have been visited Spain many times and one thing I always admire the transportation system of Spain, which is awesome. Probably one of the best Transportation operation in the European Union. You can move around city to city, village to village by Big Bus or Small Van or just a Rail. I was in Granada for over a week on job and didn’t know best way to Malaga Airport. I assumed I should take a Bus from Granada to Malaga downtown and than ride a Taxi to the airport. Taxi probably would cost 35 to 40 Euros. But things got better when I called Flightsbnb agent for advice,he told me why hassle, If there is already direct Airport Bus? I took the advice of Flightsbnb and took the Bus. It was an hour and 30 minutes ride and dropped me at the front of the Airport. I also realized there is a Rail Station next to the Airport. Basically I save Taxi, hassle with Luggage and saved money, which I spend at  Airport Duty-free shops. I always say “Life is beautiful only if you know how to use your life”. Thanks to Shawn the Agent from Flightsbnb.

Lawrence of So Cal

Thanks for making my dream come true. I been to Egypt pyramids but not the Mexican pyramids. Actually Mexico pyramids are fun because I was able to go up. It was raining but Sun appears in an hour and I was super lucky to see the Aztecs Ritual event which was taken at the bottom of the Sun Pyramid.
It was just beautiful and spiritual.

I never knew Tequila is a Mexican wine. I thought it is just liquor. This trip I learn how Tequila processed from Agave and all left over Agave straws use for clothes, Shoes, Handbags and much more. Nothing goes in to trash. I think that is very good for the environment. Thanks to agent Sam, who was very experienced and who organized my trip well….. except the driver came to my Hotel 30 minutes late.

We are excited to help you create your ultimate vacation! Please call us or complete the form and we will contact you asap.